For the past 25 years, I've made the motto of my Alma mater- the Eastman School of Music- my motto: "MELIORA"  (ever better). I continue to  refine my technique and musicianship while taking it upon myself to perfect my interpretation of the canon of musical literature that all of the masters before me have successfully confronted. The result of my labors (I hope)  has been a steadily increasing mastery of this most elusive of art forms, and a growing list of successful performances, along with audience and critical acclaim.    Performance and Education resumes on request.

I can say humbly that I'm not your average musician. I  didn't start my musical training as a child, but came to music as an adolescent. I was, however, influenced by the example of my parents, both of whom (it seemed) had music in their genes. My mother's mother (my maternal grandma) tuned pianos during the Depression, as a means to keep house and home together. My father's family sang four and six-part hymns as a family, when he was young, and there never seemed to be a time when Dad wasn't either humming or singing around the house!

I began my training on the viola in Junior High. I waltzed in to the music area of my new school, and asked if I could join orchestra, never having even held a string instrument before! In six weeks, I went from last chair, to assistant principal of the viola section, and remained there throughout most of my string 'career.'

Part of this interest in music came about from the films of Hollywood, in particular "Humoresque' - the  B/W film about a concert violinist and his dedication to his art; along with Opera bio-pics, such as  "Interrupted Melody" and "The Great Caruso." My early exposure to art music, performing and the glamour of classical music turned out to be invaluable, as it paved the way for my more directed training as an instrumentalist, and later, a singer- which led to my formal education at the hands of teachers at some of the most prestigious musical institutions in the world, and my professional career.

I began my Conducting work with CORO!

NO, that's not me (as a budding conductor); but I feel I have become a  good choral conductor over the last decade and half, largely through the work I did with the 'ensemble of vocal soloists' I founded, directed, and produced, called 'CORO!"

These seasoned professionals taught me to be a far better musician because of my work with them. Now, as Director of Voice and Choirs at a Virginia College, I continue to hone my craft, and perfect my art.

How to get where you are - each step along the way... 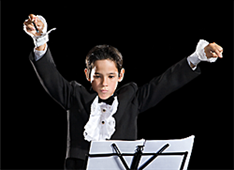 My Debut with the Saint Paul Chamber Orchestra

...in Gilbert and Sullivan's 'The Gondoliers'

Yet, mine are the eyes of an actor, also.

I didn't start out as a conductor. I wanted to be only a singer. So, I studied Acting in college with a Shakespearean specialist, studied ballet, and even some tap, and began my professional career right away, singing in the San Diego Opera under Tito Capobianco; and San Diego Civic Light Opera, under the late Don Ward, and his wife, Bonnie.

Along the way, I taught ESL for over 10 summers,  was Diction Coach for a Hollywood film, and have had numerous stints as a Classical Radio Announcer.